Psychological safety looks different in a remote setting. Today’s managers have to foster an environment of trust without ever meeting face to face. We look to industry experts and research to figure out the best way to build psychological safety while remote. 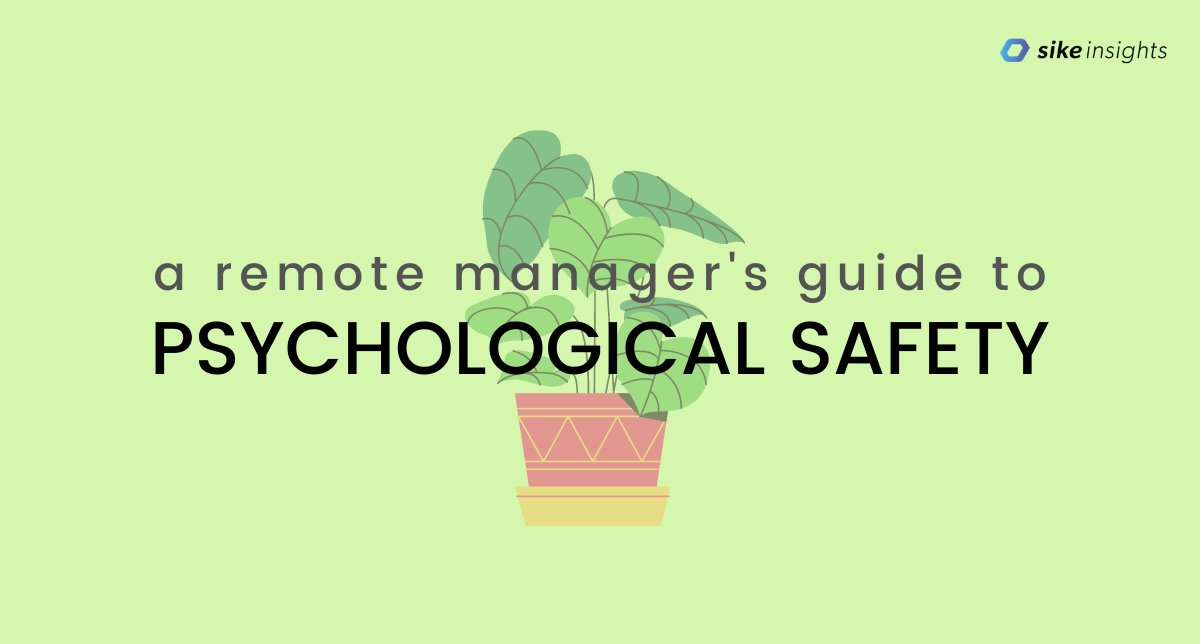 In the craziness of 2020, asking your remote teammates how they're feeling can go a long way. With burnout at an all-time high, it's crucial to know when someone's frustrated, left in the dark, or struggling at home. However, getting an honest answer over a pulse survey or 1:1 conversation can be surprisingly difficult. A lack of emotional transparency and vulnerability often has less to do with how you're asking. Instead, it depends on your team's level of psychological safety.

Google’s 2015 study on team effectiveness put a spotlight on psychological safety. The tech giant interviewed 180+ active teams and found that those that encouraged learning and failure had the highest performance and retention. The report went as far as to say, “Individuals on teams with higher psychological safety are less likely to leave Google, they’re more likely to harness the power of diverse ideas from their teammates, they bring in more revenue, and they’re rated as effective twice as often by executives.”

Google’s message was clear: creating psychological safety should be a top priority for leaders. In the last five years, companies have taken this to heart. Hundreds of blog articles and training courses have surfaced to help managers build safe spaces in the office. The concept has become such a part of mainstream leadership training that it’s reached buzzword status.

These resources are fantastic, but they’re also written for a pre-COVID era with co-located teams. Psychological safety in 2020 looks different. Today’s managers have to foster an environment of trust without ever meeting face to face. We look to industry experts and research to figure out the best way to build psychological safety while remote.

What is remote psychological safety?

We can start by understanding psychological safety from the researcher who coined the term. Amy Edmonson, a Harvard Business Professor who has studied team effectiveness for decades, describes psychological safety as “a workplace where one feels that one’s voice is welcome with bad news, questions, concerns, half-baked ideas and even mistakes.”

Expand ‘workplace’ to include virtual gatherings on Zoom, Slack, and Jira and you can start translating psychological safety to remote work. A safe-to-fail environment for a fully remote team stretches across timezones and country borders. Teammates can share their thoughts behind a screen, make mistakes, and feel completely understood.

If you’ve visited Facebook’s comment section or any kind of a forum, you’ll know this kind of virtual climate is hard to achieve. Remote managers have the daunting task of fostering team-wide openness without the clarity of body language or tone. Their toolbox includes a variety of messaging platforms, emojis, and the occasional Grubhub gift card.

Why should I care about psychological safety?

Remote work makes psychological safety more important than ever. A Gallup study revealed that only 30% of U.S. workers felt like their opinions counted. Throw in increased loneliness, miscommunication, and stress from forced work-from-home and that number drops even lower. However, the same study found that “by moving that ratio to six in 10 employees, organizations could realize a 27% reduction in turnover, a 40% reduction in safety incidents, and a 12% increase in productivity.”

That’s why we believe the best remote teams use mutual trust as glue in virtual environments. A foundation of safety creates closeness and synergy, allowing distributed teams to maintain alignment and take risks despite completely asynchronous interactions. It’s the fundamental building block for a fantastic team culture and it starts with the relationship between a manager and their teammate.

What leads to low psychological safety?

Unfortunately, managers often hurt their remote team’s psychological safety without realizing it. To understand common mistakes, we spoke with one of LA's top executive coaches. Janine Davis is a seasoned Executive Coach at Evolution Coaching, which coaches leaders at leaders at Slack, Dropbox, LinkedIn, and more.

She explains, “Most fundamental leadership gaps which might lead to lack of psychological safety are made wider due to remote. Especially with pandemic conditions, economic uncertainty, industry-wide layoffs, social unrest, environmental disasters, and polarized election. That’s because stress exacerbates our less desirable qualities.”

Teammates are extremely vulnerable at this time. They look to their leaders for not only company direction, but emotional guidance and reassurance. Leaders that haven’t made efforts to build their EQ will struggle to convey warmth and empathy in a virtual setting. As a result, they can come off as unreasonably harsh, cold, or out-of-tune with their team’s needs.

These “bad” remote manager behaviors are more common than we think. Davis lists a few tasks that remote managers often struggle with:

How can I improve my team's psychological safety?

Psychological safety must be maintained and changes with the team dynamic, so there's always ways to improve. It takes time, but raising your team's psychological safety can start with a slight reframing and a few simple everyday habits.

We often mistake vulnerability with weakness or oversharing, but opening up creates room for trust. To improve the team's psychological safety, both you and your teammates need to be vulnerable. Thankfully, vulnerability fosters positive feedback loops and leading with humility can often spark a reciprocated action. It's hard to be vulnerable over a screen, but there are several simple ways to start:

We mention trust a lot. Not only is it the foundation of psychological safety, but its also one of the most common values in remote-first organizations. Remote and asynchronous work requires a lot of trust, and this falls to the trust we share between our teammates.

According to Anna Barber, last year's Managing Director of Techstars LA and a trained Executive Coach, trust is based off four pillars

As psychological safety is reduced to a buzzword, managers often forget the uncomfortable parts of the term. Psychological safety doesn't mean perfect harmony or constant agreement, but the safety to discuss without fear of punishment. There are fantastic articles out there regarding safe ways to fight and have arguments, but today we'll look at how you can employ frameworks to make Zoom and Slack safe spaces for disagreement. 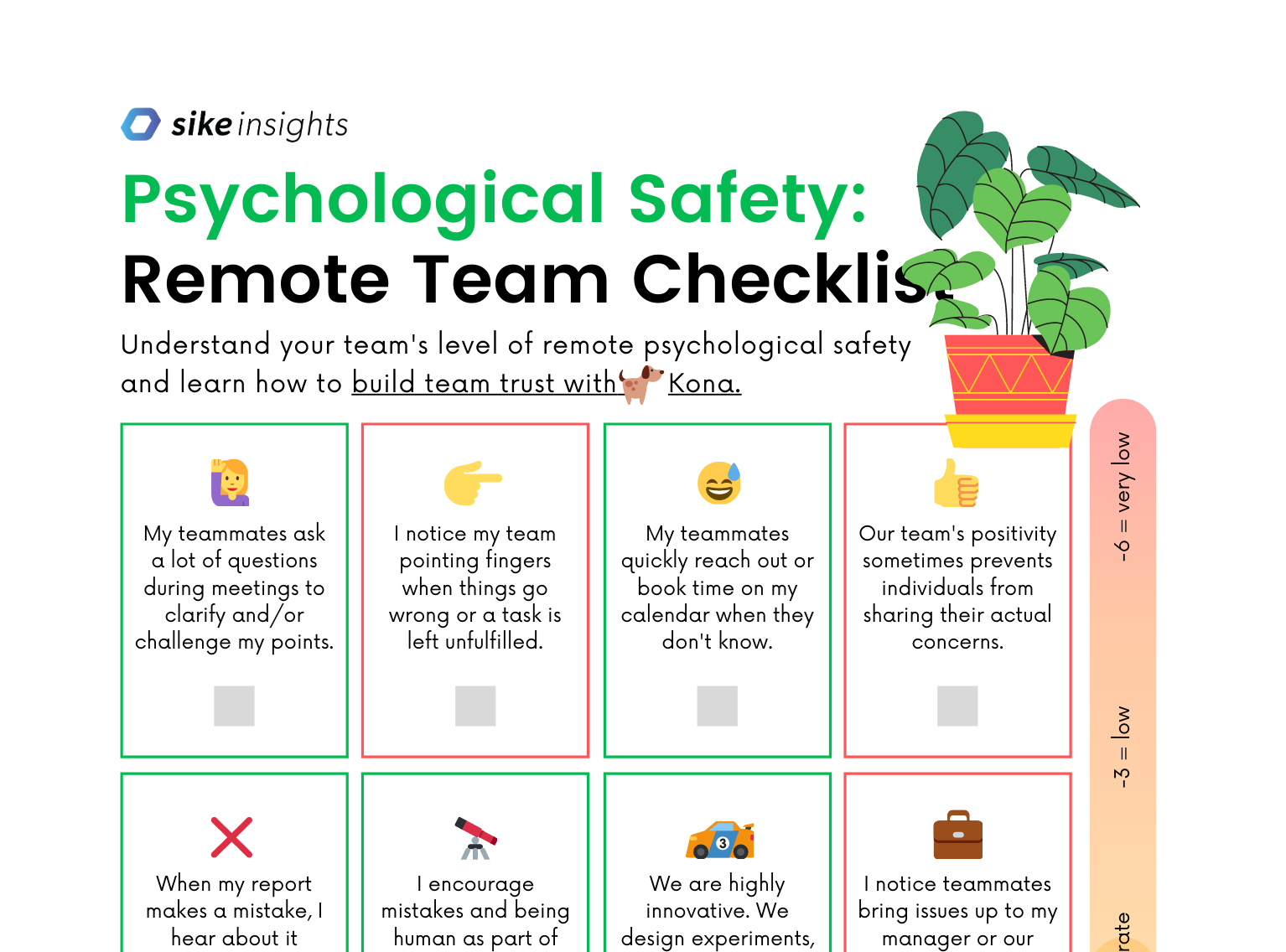 Get our Psychological Safety Checklist

How do you know your team's level of psychological safety? Easy! We've made a free downloadable checklist for both you and your team. Simply calculate your score and easily look at gaps.

Thank you! You'll start getting emails from us soon.
Oops! Something went wrong while submitting the form.

Psychological safety looks different in a remote setting, but it's more than worth the effort. The best companies use their level of safety as glue and a foundation of trust for async tasks. By building simple habits, managers can start building their team's psychological safety and making a difference in how teammates care for one another.

Get deep dives on leading remote teams and building EQ. Delivered to your inbox weekly.

Thank you! You'll start getting emails from us soon.
Oops! Something went wrong while submitting the form.
|
Home
|
Product Overview
|
How It Works
|
FAQ
|
Privacy Policy
|
Try For Free
|